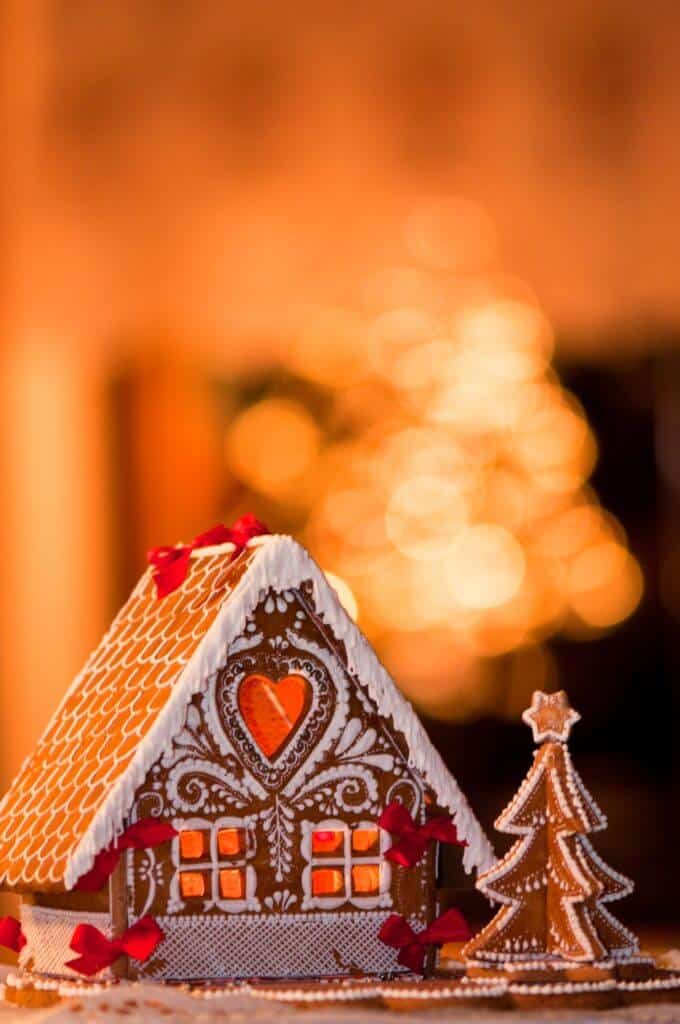 First, there were your children’s – or your own – simple graham cracker “gingerbread” houses made in boy scouts, girl scouts or other youth group organizations as part of the holiday craft making sessions. Then, you may have created gingerbread patterns yourself one year, baking sheets of house-shaped panels, and hosting a gingerbread house making party for your children’s friends in your own home (Click Here for a recipe, pattern and icing instructions).

The scent of gingerbread baking is certainly a seasonal favorite, and what is better than mixing up a little royal icing, purchasing your favorite candies – both holiday themed and otherwise – and using them to exquisitely adorn an edible decoration? (We say, breaking it all down again after New Year’s and gobbling it all up with your favorite cup of tea…)

For many of us, building and decorating gingerbread houses around the holidays was a first foray into the world of home design – albeit an exterior version.

Before The House, The Root

While the actual craft of artistically decorating gingerbread, and making it into houses, originated in Europe, the heart of gingerbread – the ginger root – is actually a native of Asia. That should come to no surprise for those who enjoy cooking authentic Asian recipes. At some point, most likely via trade routes, the spicy, sweet and aromatic ginger root piqued the interest of palates in other countries.

Initially, the Greeks and Egyptians bought and traded for Asian ginger root, which they baked hard and incorporated into various religious practices and rituals. These traditions continued for thousands of years until about the 11th century when, as Steven Stellingworth’s The Gingerbread Book tells us, crusaders fond of the flavor brought ginger back with them from the Mediterranean to share them back home in Turkey; this was the beginning of the longstanding tradition of delicious gingerbread – covered with incredible, icing-based artistry.

Unlike any flavor they had yet to experience, medieval confectioners quickly began incorporating ginger into their bread and cookies. Gingerbread was quickly fashioned into all manner of shapes, most notably flowers, birds, and animals. Armor was also a popular shape, and ladies often gave their favorite knights gifts of gingerbread as a good luck charm. Gingerbread men may also have their origin in this early European life, as single women were known to eat “gingerbread husbands” as a way of helping to attract the real thing into their lives.

We know that Shakespeare was familiar with gingerbread. In his play, “Love’s Labour’s Lost,” Costard remarks, “An I had but one penny in the world, thou shouldst have it to buy ginger-bread…” Gingerbread became a popular ware for street vendors in Germany, who decorated the dark, heart-shaped cookies with sugared messages and designs – almost like those associated with Valentine’s Day heart candies. Only, rather than “be mine,” or, “I’m stuck on you,” German gingerbread cookies said things like, “Du bist einfach super,” which means, “you’re really super,” or, “Alles was ich brauch bist du,” which translates to, “You are all I need.”

From this cookie-based artistry, the gingerbread house was born. In fact, it’s thought that Germans were the original gingerbread house makers, perhaps inspired by the famous Hansel & Gretel fairytale, which was set in Germany’s foreboding Black Forest. If you recall, that delectable house was built by an evil witch – entirely of candy – in an effort to entice poor, lost children into her home, where she baked them into cookies.

Today, gingerbread houses can be as sweet and original as those graham cracker versions I mentioned above, or they can be as grandiose as the ones entered into gingerbread competitions that take place around the world. Visit Newsweek’s coverage of Gingerbread House Day 2019, where you can see unbelievable gingerbread creations – and be inspired to make some of your own.